Pay up to 21 days after purchase with:

The Trevia planter magically attracts looks. We have succeeded in making the trapezoidal shape
a new dimension, today named 'Trevia'.
The Trevia is not only visually beautiful, but also functional. The sturdy double-walled construction,
in heights from 70 to no less than 150 cm and numerous colours and illuminated variants, make a deployment
to personal taste possible both inside and outside.

The Trevia planters are produced from rotationally moulded pure
polyethylene. PE is UV-, frost- and weather-resistant.

The standard range consists of 4 colours: ruby red, anthracite grey, signal white and beige grey and
is complemented by a variant in transparent white, in which a bright illumination makes the colouring
cares. They are available in 5 different sizes: 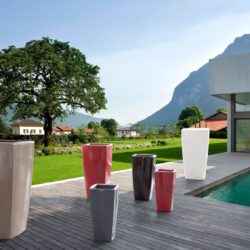 This planter is not only aesthetically pleasing but also functional. You can use it to

It is a fantastic way to demarcate zones or ensure a certain level of privacy. Certainly the largest variant,
in a row of three, radiates an incredible 'grandeur'.

This website uses cookies to improve your experience while you navigate through the website. Out of these, the cookies that are categorized as necessary are stored on your browser as they are essential for the working of basic functionalities of the website. We also use third-party cookies that help us analyze and understand how you use this website. These cookies will be stored in your browser only with your consent. You also have the option to opt-out of these cookies. But opting out of some of these cookies may affect your browsing experience.
Necessary Altijd ingeschakeld
Necessary cookies are absolutely essential for the website to function properly. This category only includes cookies that ensures basic functionalities and security features of the website. These cookies do not store any personal information.
Non-necessary
Any cookies that may not be particularly necessary for the website to function and is used specifically to collect user personal data via analytics, ads, other embedded contents are termed as non-necessary cookies. It is mandatory to procure user consent prior to running these cookies on your website.
OPSLAAN & ACCEPTEREN